In: The Management Rights Market

Contributed By: Resort Brokers on 8 August 2018

TWO landmark oceanfront resorts on the Sunshine Coast and Fraser Coast changed hands today (August 1, 2018) with the settlement of separate blue chip management rights sales for a total of close to $15 million.

The sale price was not disclosed.

It is the second time Mr Millar has sold the management rights to the prime property, which was originally launched in 2007 as Peppers Pier Resort.

“I had previously handled the sale from Mantra Group to Oceans Queensland in 2014, so I knew the complex intimately and am pleased to now see it pass to top flight operators Oaks and Minor Hotels,” Mr Millar said.

“Resort Brokers has had a long association with Minor Hotels and has been closely involved in their expansion in Australia through a number of significant acquisitions here in Queensland, on the Gold Coast and in Melbourne.

“The Hervey Bay complex is an exceptional hotel-style property and the management agreements are such that it can operate as a full service resort with an exceptional range of recreation, spa, conference and hospitality facilities on site,” he said. 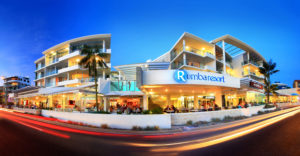 At Caloundra, the award-winning Rumba Resort has been bought by SC Resort Management, headed by former On The Beach Noosa operators, Benn and Leslie Wilson.

The price paid for the rights to the 5-star beachfront resort and associated real estate was also not disclosed.

“It’s great to see it sold to an experienced local Sunshine Coast operator.”

Mr Millar said the appetite for quality, large-scale resort management rights was strong, particularly on the Sunshine Coast where major infrastructure investment and a thriving visitor economy were driving demand.

“Investment in region-building projects like the new Maroochydore CBD, Sunshine Coast Airport expansion, more tourist attractions like the $450 million Actventure theme park project, not to mention the university and hospital expansions, have really signalled the region’s arrival as a dynamic economic, tourism and lifestyle hub,” he said.

His other recent sales have included beachfront resorts in Hastings Street, Maison Noosa and On the Beach Resort, both for more than $5 million, Aqua Vista Resort Maroochydore, Verve on Cotton Tree, La Mer Sunshine Beach and Marcoola Beach Resort.

Recently Mr Millar listed the management rights and associated real estate at the luxury Altitude on Montville property with an asking price of $3.5 million.

He has also been appointed to sell The Billi Resort, a unique accommodation destination at Cable Beach in Broome, Western Australia.